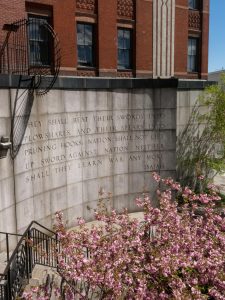 They shall beat their swords into ploughshares… Isaiah 2:4

This New York City park sits just below my first apartment. I visited it almost daily during the years I lived in Tudor City.

The adolescent, protesting child of the Vietnam War era wondered whether those words would come to pass in my lifetime. Here in Northern Ireland, I believe they have.

Given the full blush of naïve optimism, I assumed that should I live to see such a thing, it would be momentous. It is not.

Moving from war to peace has nothing to do with signatures on treaties or momentous occasions.

It has everything to do with a sustained desire of the majority to maintain the peace, coupled with their sustained and vigilant attention to creating a new reality.

What swords into what ploughshares?

Hijacked as a weapon during The Troubles there’s an oft repeated quote by then Sinn Fein Cultural Officer and Belfast teacher Padraig O Maolchraoibhe in 1982: “I don’t think we can exist as a separate people without our language. Now every phrase you learn is a bullet in the freedom struggle.”

He added that the restoration of the Irish language was part of the process of the “decolonisation of Ireland”.*

My relationship with the Irish language has evolved over the half dozen years I have been here. In early days I heard it used only in the public space by politicians intent on dividing an audience into “them” and “us”. I viewed it as a weapon, as when it was wielded, I found it hurt not to be able to understand.

I’ve made peace with it now. The journey is described in a blog post called “The Irish Language“.  It includes the stories of the three people I have to thank, both for enlightening me and for their wider impact on the culture.

It is in the work of one of them that I see not only the ploughshares, but this:

Tell them to beat their swords into ploughshares!

And then tell them to beat their ploughshares into musical instruments!

Then, if they want to make war, they’ll have to stop and make ploughshares, first.*

Linda Ervine is a Belfast woman making such music with the Irish Language. Simultaneously , it’s being embraced by the Diaspora. I can’t imagine a better way to “de-politicize” the language.

A young colleague, passionate about Irish and it’s cross-community cultural significance has been sharing his vast knowledge of it’s history. Between his and Linda Ervine’s evangelizing I have learned:

Interest in the Irish Language emerging in the Diaspora, the growing number of Irish speakers in the Protestant community in Northern Ireland and a hunger to understand the cultural significance of the language among many – all mark a move toward reclaiming the language for all the people of Ireland.

Use of the language is no longer about “decolonizing” but rather reflective of a common cultural heritage. It embraces how we are related to the ancient land and not attached to recent politics.

We who have sprung from this island – from Ulster, Leinster, Munster or Connaught – have more in common than that which divides us.

The Irish Language may now be the vehicle that unites the people of the island of Ireland, irrespective of their taxing authorities.

An article by Camille O’Reilly, which is a studied review of the Nationalists and the Irish Language in Northern Ireland may be of interest for more on this.

My exploration and understanding why reconnecting with the Irish language is so significant can be found at: The Irish Language

* a remembered quote from a sermon over 20 years ago – I was delighted to find it on the dedication page of Roger H. Siminoff’s book,  The Luthier’s Handbook . I’m afraid I still don’t know the original source.