Brigid is the Celtic goddess of abundance traditionally honored on February 1st.

A floodgate is the metaphor I’d used for years when I described my fear of being paralyszed if I unearthed a long-buried childhood trauma.

Rage, even the expression of mild anger, was forbidden in the household and schools in which I was reared.

The message was uncompromising: 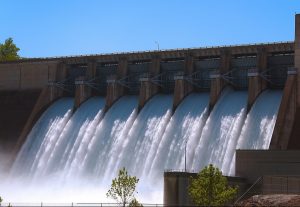 In spite of that, I’ve learned to trust that life is to be lived and not controlled.

Last week, I fully experienced the memory of a trauma that sent me into a rage. After half a century the floodgates were opened. A gift from my unconscious. I was blind to a toxic relationship – and the wounded little girl inside recognized what I did not. So she grabbed my attention- the memory was her SOS to me.

In that rage though, I reclaimed myself from the polite peace I was maintaining to make things comfortable and normal for the folks around me.

Apparently, I’d wasted half a century fearing I would drown in a flood.

Oh, the liquid metaphor was correct, but it turns out that I was dying of thirst. A thirst for the truth I couldn’t see if I didn’t allow for keeping up perfect appearances and letting my head overrule my gut.

I was reminded that the most important lesson distilled in the “Artist’s Way”, is that to recover an authentic, creative self, one needs to embrace anger; it is a friend. Not a kind or gentle one, but a loyal one.  It is truthful.

Another message is that the way in which we recover our authentic selves is one day, one step at a time. Our unconscious minds are to be trusted. That memory I’d feared and suppressed did not return until I was able to handle it.  It is for that I am most grateful.

If you are interested in taking steps to reclaim your creative self, decide to.

When we adopt a discipline of listening to our body and becoming mindful of our real feelings we’re no longer guarded. Being guarded saps the energy which would otherwise fuel creativity .

We are first and foremost human beings, not a human doings. When we “do” polite, living life to please others, it’s a lot of work with little room for play – rethink it.

Take a walk, a yoga class, have a massage. Feel.

I am often reminded of a catechism lesson of my childhood: “Who made you? God made me, I was made in the image and likeness of God”.

Let’s embrace the divine within us. And consider that the gods of our ancestors raged. One even sent a flood.

Yesterday was Brigid’s day, I’m particularly grateful that the gods and goddesses described by Christians, Jews and Pagans are consistent in their message.

I needed to be reminded that even an abundant flood of anger is empowering.

And it is a blessing that I have been sustained to reach this understanding.