On Changing Conversations in Ireland

On Changing Conversations in Ireland

We tell stories in Ireland.

Yet, we don’t talk enough in conversation about what our current and past realities are.

Stories set our experiences in stone; a concrete past. Conversations allow us to evolve and to heal. In repeating, even our traumatic experiences from a distance, in a now safe environment, we re-experience them as our current selves, older and stronger for having survived.*

Storytelling has us repeat experiences along our tribal, party lines. We can be two faced in our delivery, polite and politically correct when telling them to the outside world; but within our tribes we stubbornly cling to old narratives, and we are often intolerant and recalcitrant in the telling.

Three speakers from panels at the XchangeNI Summer School, challenge us to tell fewer stories and have more conversations. 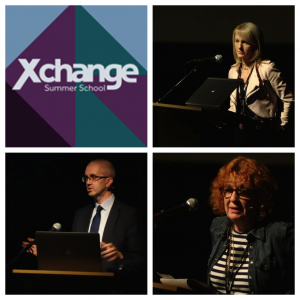 Debbie Watters‘  talk began with a question and ended with one.

“We’re 16 years on from the peace process, where are we now? And what does liberty and peace process look like in loyalist communities?”

You have never heard such passion more gently expressed about, among other things, the realities of life and absence of leadership in the working class Protestant community.

Debbie pointed out that within the loyalist community she hears that “things have never been so bad”. She reminds us that “(p)eace is not just not absence of violence, it is about quality of life …”

I was left wondering: does liberty even exist in a democratic process if a community perceives themselves without representation?

Steven McCaffery led with: “We don’t talk enough about parades… parading has been a massive issue we trade arguments and insults but we don’t actually trade facts.” He called for data rich conversations on a range of subjects in which we talk with each other; not at each other.

He challenged us to take a long view and focus on “political dynamics building outside NI which will have a huge impact on NI”.

Why does the rise of UKIP, predominantly in England matter? How many of us are aware that as much as 85% of farming income relates to EU funding?

“It will raise questions…about the UK’s place in the EU…  NI has an entirely different relationship with the EU than the rest of the UK…It’s a big debate leaning in on us.”

A long view, he reminded us, would also have us focused less on the “flag stories” of December 2012 and more on the census results released that month.

“We are a society of minorities, more diverse than ever… this (c)hanging demographic means the future has to be a shared future.”

In this context let me reinterate Debbie’s question:

“What is our mutual responsibility to encourage, if not to coerce, our politicians to stand up…”

This was not a flippant observation, her call was to “challenge the ancestral voices of our own tribes”. This requires a new narrative about our history. The approach of the centenary of 1916 invites such a challenge. Framed in the context of a democracy in which “the constitutional nationalists were driven out by violent nationalists” we might begin to discuss how that legacy of violence has and continues to have an impact.

She calls for more of an “equality of rhetoric”. And less of what she describes as the “immensely defensive” Orange narrative, or the “impressive” but “profoundly dishonest” Republican narrative.

Please follow the links to the left of the photo. Listen to the speakers in their own words, and then, let the conversations begin.

*For an interesting read on rewriting our most traumatic memories see “Partial Recall”, Michael Specter, The New Yorker Magazine 19. May 2014 on the work of Daniela Schiller, PhD