Changing the Conversation, the Disservice of Silence

Home/Growing, Civically, Growing, Personally, Storytelling/Changing the Conversation, the Disservice of Silence
Previous Next

Changing the Conversation, the Disservice of Silence 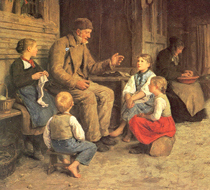 Oh, we Irish are grand storytellers. Poor though, in frank and open conversation. Worse at speaking truth to power. Perhaps the former comes naturally. For the latter, skills are required.

We teach polite, we teach deference, we don’t teach assertiveness or skills to influence¹. That is a very specific skill set.

We lack a belief that we are entitled to be heard. Not to always get our way, rather to be respected when we assert our needs, our insights, and ourselves.

How else can one explain the dearth of leadership across public institutions in two governments in Ireland? We whinge to our friends, but we are silent in public.²

Imagine finding your voice as a way to take back your power. And to empower others.

I tell this story often, to illustrate the way in which we silence ourselves.

The butcher enquired of my special request. “What would you be wanting that for?”

I’d forgotten that even a paying customer’s whims are not always humored in Irish villages.

“My children are coming and it’s their favorite.” His politely stern retort: “Well, your children will just have to learn to eat Irish”

The child in me recognized the tone. Educated by an Irish order of nuns in an academy with a mission to transform the daughters of immigrants into ladies worthy of the upper classes their parents aspired to, I knew to smile, nod and change my order.

It would have been an automatic response before a thity year journey of finding my voice. My response was polite but fierce.

I did and it was lovely.

Apart from my reputation as that “cheeky American woman”, all goes well enough. I shop there and enjoy conversations about children and grandchildren and have fine meals of my choosing.

One, an American expat said “Eve, you will just have to learn to act Irish”. The other, a woman with a family of six, regularly drives 18 miles round trip to shop elsewhere because “he always tries to talk me out of what I want”.

Surely these responses serve no one.

Failure to assert what we need, and in this case, what we are entitled to as paying customers, does a disservice to all.

I don’t get what I want, the environment suffers the insult of extra emissions and the butcher misses an opportunity to serve, to please and as in his case with me, excel.

It belies a disrespect of both the merchant and us. It is in his best interest to sell the meat already cut in the case. It is simply incumbent upon me to insist on what I want. That is a transaction of equals.

Working with a group of clients I used this example to explore the nuances of language, practice assertiveness and exercise our voices in a new way.

Months after the long forgotten session I ran into one.

“I have a butcher story for you. I remembered what you said about asking for what we don’t see, or sending a dish back.”

In the past out of “politeness” she wouldn’t have asked for something she didn’t see.

“So I asked for rhubarb.” He didn’t carry it, he didn’t know why, but he said “The farmer up the road has a field of it. Leave it with me and come back tomorrow.”

A few hours later a lad from the store delivered a bunch to her house. Now, in season he carries it.

Her assertion provided an opportunity for him to be generous, prove his skill as a wise merchant, and my point.

A fine man, willing to please, he is rarely given the opportunity. In our deference we don’t empower each other to do better.

Power and influence are there for the taking. It requires no force, just practice. In fact you may find that the more softly you speak the harder they listen…and pay attention.

¹The Elements of Influence

The Elements of Power

For more on the painting – The Storyteller: http://robvanderwildttellerstalespictured.wordpress.com/2013/07/21/this-man-is-a-real-storyteller-and-so-is-his-painter/