The solstice has passed, we’ve had our shortest day, and I look forward to longer daylight hours. Clearly our cultural and religious traditions support that desire.

In a 2010 post “Happy Chanukah, Ireland”, I reflected on the tradition of remembering the re-dedication of the temple defiled by the Greeks. 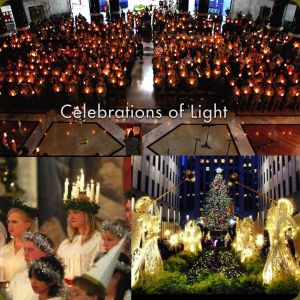 “The miracle celebrated is one of faith and light. The oil found there was only enough to light the ritual lamp for one day; it lasted eight. We recall this by lighting candles every night for eight nights. On the first night one, the second two and so on.

The holiday, at this darkest time of the year reminds us that with faith and a commitment to re-dedication every night brings an ever-increasing amount of light.”

No Christmas celebration is complete without festive lights, be they candles in sanctuaries, in crowns on the heads of young girls or bedecking a tree.

The Christmas story of the birth of the “light of the world” complete with wise men following a star, was likely imported to the solstice season. Whenever the actual birth, I am intrigued by this “Winter Solstice described in layman’s terms“:

“From the summer solstice to the winter solstice the days become shorter and colder and from the perspective of the Northern Hemisphere the sun appears to move south and get smaller and more scarce.

The shortening of the days and the expiration of the crops symbolized the process of death to the ancients. It was the death of the sun.

And by December 22 the sun’s demise was fully realized for the sun having moved south continually for 6 months makes it to it’s lowest point in the sky.

At least perceiveably for three days. And during this three day pause the sun resides in the vicinity of the Southern Cross (or Crux) constellation and after December 25, the sun moves one degree , this time North – foreshadowing longer days, warmth and spring.

And thus it was said, the sun died on the cross, was dead for three days only to be resurrected or born again.”

I love the imagery. Third day of darkness since the Solstice – December 25th as the archetypal birth of the year!

Whatever your faith tradition, even absent one – these are universal stories.

The ancients coped with the darkness by celebrating with light. These traditions evolved in the myths created to explain what was fearsome, awe inspiring and confusing in the natural world.

Whether that light is literal or figurative, I’d encourage all of us to look within and not let the light go out.

Peter, Paul & Mary brought their passion for storytelling, peace and folk music together in “Light One Candle”.

When the breadth of suffering in the world overwhelms, we can remember that change comes, as with the return of the daylight, one degree at a time.

Consciously living in the light honoring “the terrible sacrifice justice and freedom demand”, seeking “the strength that we need to never become our own foe” and keeping faith with “those who are suffering pain we learned so long ago”, we can collectively bring an ever-increasing amount of light to the world.