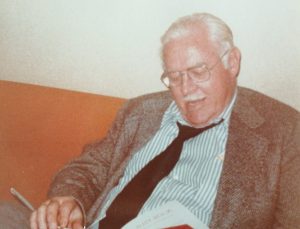 I miss you. And Happy Father’s Day.

I miss your sense of humor, your wisdom and the very un-Irish, Talmudic way you drove home your messages, with questions.

And yet, even selfishly, I’m not inclined to “wish you were here”. The world you imagined has not yet materialized.

How lovely it would have been had your story neatly concluded as did Judy Collins’ My Father story in her song.

Remember telling my 5, 6 & 7 year old self all about the natural world?

All about “Five Acres and Independence“?

You’ll be pleased to know it’s still in print. Good thing too – because while it was meant to teach subsistence living to a post-depression generation – there are a few generations coming who will likely need it.

More on the economics of that why, another time. 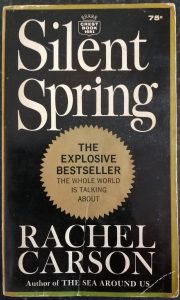 Recently, I found a musty old copy of “The Silent Spring” which looks a lot like this one here.

Though a funny thing happened as I re-read it. I heard your voice. Not while reading Rachael Carson’s words – but in remembering all your asides. You know – the ones where you imagined that I’d live in a house with a rainwater cistern built into the plumbing or irrigating the garden. Where the sun and wind would contribute to my energy usage. And where I’d be using grey water from the dishwasher and washer to flush the toilets.

Sadly though, not yet. And likely not even in my lifetime.

Do you remember telling me that the oil embargo in ’73 was a good thing? We were going to drive smaller cars, rely less on fossil fuel and run cars on electricity. Electric cars took another 40 years and they’ve still not caught on. Cars only stayed small until we forgot. Less than a decade on.

We recycle now, as you said we would. Though not universally. Landfills overflow, and the oceans are full of plastic. A dead whale was found in Thailand with 17 lbs. of plastic in its gut. Even fresh water streams are polluted with micro beads of plastic from the synthetic clothes we wash.

And while the bald eagle is back, I’m afraid the last male Northern White Rhino died this year. Few seem to notice that we’re losing about 150 plant, insect, bird and mammal species every day.

I remembered another lesson recently, on encyclicals, labor and social justice.

How much did you think I could understand? Did you know we wouldn’t have enough years to talk about these things when I was grown? Or was it just the heady, optimistic times in which we lived?

Kennedy in the White House talking on the phone, Nixon in the doghouse chewing on a bone.

And then he won. An upstart Catholic in the White House! You were sure that meant there would be attention paid to social justice. Sure wasn’t that why the “Power Elite” fought so hard against “the papist”?

And it was John XXIII’s time. I can still here the passion and faith with which you explained why you’d been an organizer, why labor unions were so important and how it had been the words of Pious XIII’s Rerem Novarum which inspired all that in you. You explained it all in my Communion year. You wanted me to understand the significance of a that year’s Papal Directive on Christianity and Social Progress.

For what it’s worth – the only part that really sunk into my young brain was the point you made about my uncles, your brothers. They were steel workers. You said they worked harder at back breaking work, than you did at a desk. You could do your job to 65 or 70 or beyond – but their bodies wouldn’t last to pension age. That was why a balance between labor and capital – as well as respect for the difference in an earned vs. an unearned dollar – was important.

How did you know that I’d remember enough?

Is that why you went on at great length about social justice, job provision and social safety nets? By then I was 10, 11 and 12. I loved the long drives and the stories you told during our Sunday visits – touring through the reservoirs, parks and forests built by the CCC workers. I remember well your stories that their lives in those camps, bleak though it was, offered the only homes and work available.

I remember all the buildings we visited – most artfully embellished with friezes and sculptures owed to the New Deal’s WPA architects. Pragmatism born of desperate times, enhanced by a respect for the creative.

Often I recall your awe for the power of what the public and private sector could accomplish in the sheer depth and breadth of the infrastructure projects, iconic skyscrapers and the monuments you’d point out in our drives around New York City, upstate New York and New England.

I live in Ireland now.

We visit and I giggle most Saturdays mornings in all but July and August. It’s then that I bring in wood and peat for the stoves. It makes me recall your beleaguered expression and shaking head when you described life in Ireland on return from Grandpa’s funeral here. You always began with – “Kiss the American ground you were born on…” followed by vivid and unattractive descriptions of the third world country Ireland was then.

With each filled basket, I can conjure the look. Your loving eyes are firmly fixed on me from over the top of your glasses. I hear you exclaim, “You silly witch, did your grandfather not see to it that we were born in a world of boilers and indoor plumbing?”

And so he did.

But clearly there was a circle in need of closing.

I returned a century after he left. Nearly 50 years after he died. I wasn’t actually aiming for ‘his Ireland’, though I find myself stuck in it. As penance for some as yet undetermined failing, I work at telling your stories, sharing your wisdom and hoping that as America has abandoned its promise, moving forward, Ireland can adopt it.

The call to ‘my Ireland’ came after years on an annual course. The week-long events were set in Sligo, Cavan, Antrim, Donegal, Down and Mayo studying Jung and archetypal psychology.  Here I met Bridget, Grace and Maeve – in a place where feminine characters and the land dominate in myth. That divine feminine is what called me and where my hope for this place resides.

Here I experience the ancient and natural worlds as you shared them. Living close to the land demands a respect for riotous springs, abundant harvests and the work of just showing up for the hard labor in between.

It invites us to celebrate the seasons.

I closed a circle with that as well. I am at home with an agrarian, eight season calendar. I felt it while rearing your granddaughters in a faith tied to festivals like Imbolc and Lughnasa,  known to them as Tu Bishvat and Sukkot.

And I live in medial space.

Literally. On the border of Ulster – just beyond the Pale. And not far from Mary Gale Earley’s home place. Her journey informs so much of my understanding here. From Ireland to America, Protestant to Catholic, who could have imagined that a quote from John Henry Newman‘s faith journey printed on her memorial card, would serve as insight into my struggle to understand this land of them-uns and us-uns?

And figuratively. I live as you did. Devout in your faith, and excommunicated nonetheless. Neither in nor out of Rome’s good graces. I too, live as the other – an American neither Catholic nor Protestant neither in or out of communion with my neighbors.

And always, I carry with me your good humored observation that –

We’ll get there, by degrees. The way an Irishman goes to heaven.

And while ‘we’ll’ not get where you thought we were going in my lifetime, I’ve every confidence that your granddaughters will move the world in the direction of your dreams.

They made those very same road trips, they heard you marveling at those miracles of social and economic progress albeit through my voice, and learned the optimism and sense of possibility that your “Greatest Generation” brought to the world. And I’m reminding them here.

And because, it’s been 38 of these June Sundays without you – I’m reminded of another song from the sixties, Who knows where the time goes?

Good-night; ensured release,
Imperishable peace,
Have these for yours,
While sea abides, and land,
And earth’s foundations stand,
And heaven endures.

When earth’s foundations flee,
Nor sky nor land nor sea
At all is found,
Content you, let them burn:
It is not your concern;
Sleep on, sleep sound.

And makes me smile remembering another look over the top of your glasses, with a beleaguered expression and shaking head. All while lamenting over your lot to have had a daughter who favored the work of Houseman over Yeats, Joyce and countless other Irish poets.